Give Our Team a Cheer (and also a little money)!

Dear whoever you are, you lovely, generous human (yep, I'm trying to butter you up):

The last night of our staff camp last year, as everyone was sitting around a campfire, I tried to put into words how much I appreciated everyone on our team, and express what they meant to me. Like the unbearable sap I often am, I burst into tears and some half-arsed things came out that so didn't do what was in my heart justice. Thankfully, I think camp itself made clear to everyone who attended, how much this team means -- to me, to each other, to those we serve. There are so many reasons I am so excited to be doing it again, and think it's super-valuable to Scarleteen as an organization and a service provider. And honestly, one of the biggest is that this amazing team deserves this kind of reciprocal inspiration, recognition and appreciation for at least a few days of the year.

We're more than halfway to our fundraising goal for our amazing staff camp, thanks to around 50 super-helpful people, but we still need to raise around $2,500 to make this work. Camp is coming up mighty fast, and our costs along with it.

tl;dr: Scarleteen staff camp last year rocked our world. It made our team stronger, our communication better, and boosted the everloving yay out of our morale, and that’s all going to mean better helping the five million-or-so people we serve every year. So we’re doing it again. We’re also again asking you and yours, if you’re able and appreciate what we do, to help us pay for it. If you’re in, click here, and thanks a whole bunch!

I want to take time to talk about what I think really makes Scarleteen different from other sources of sex education and ways of doing sex education these days. And no, it's not that, as one of our team says, we've been made of effing rainbows since 1998 (well, not only that, anyway).

After approaching 20 years of doing sex ed as a gig, and nearing 30 years of being an educator and creator of unique learning environments, it's been interesting lately to take the long view. What I'm happiest to be seeing is exactly why I'm asking you to throw a few bucks our way today.

I'm talking about our amazing team. There just aren't a whole lot of long-running sex ed cooperatives, online or off, as you may have sadly observed. The collaborative spirit and collective commitment here is just something else.

When I first came up with and launched Scarleteen, what made it seem so different and new was that it was online, because online, just as a thing, was really new to most people then. On top of being online, it was feminist, 20-something-queer-womanish-type-person-created, and it was warm, honest, didn't talk down to young people and was unapologetically sex-positive and pleasure-centered from the start. It was just a whole lot of WHAAAAAAAAAT IS THIS MAGIC for many who found it, especially in the first few years.

Then being online became less new and unusual; and then there was more and more content online, period, including more sex, sexual health, and relationships content. Then there was a little more out there that queered it up like we do, or had the audacity to occasionally suggest sex might just be enjoyable, a thing we didn't think was all that radical (still don't), but apparently was to a lot of people (still is). Then there was more that included and saw survivors, or was more holistic than sex ed had usually been.

You get the picture: we were still considered weird in the grand scheme of things, but started to have some more company. Then we added a moderated forum, and that — direct engagement with users, which we had from the very start via email — was the thing we offered others didn't. Then that too became less new and unusual.

Less so than before, but by and large, we're the weirdos mister in this field in one way or another, including our educational model, the way we use it, and just who we are as people. Our whole team loves doing this work, and is dedicated as hell: we have some volunteers who have given us their time for five or ten years, and most were once users of the site themselves. We still have a level of direct engagement and relationship with our readers and site users that is pretty unusual for something of our slim staff and budget size but very wide reach. We're often set apart because of our history, especially online, and how we paved a way for more people to provide sex education online.

But I wouldn't say those things are the biggest standouts between us and both other sex education organizations and services, online or off, or us and other kinds of alternative/unschooling education projects or groups right now.

I think what really makes this place mighty magical, still, is our team.

I'm not generally a big worrier, but I've worried lately about some things with work, and with some of the various fields I and Scarleteen have a foot in.

I've worried about being a sex educator or part of a sex education service and burning out; going off the rails like people in this work sometimes do; losing one's way; getting too caught up in ego; doing those we're supposed to serve, or the field of sex ed, a profound disservice. I worry that as the closest thing to a boss we've got around here, I might inadvertently create shitty workplace culture. I have worried about myself or Scarleteen becoming out of touch or out of date when it comes to who we want to keep serving and centering. I worry that I'll start really messing up as a sex educator, which can have pretty grave consequences in this line of work, and be without needed calling out, help to work on any needed repair, or emotional support.

But these worries are almost always easy to let go of these days. That's because our present team, and how we do team around here, is incredible protection against all of that. It's a goddamn superpower (pardon my French).

No one in this team is going to go anywhere near off the rails without more than one person supportively and kindly letting them know; no one will be without people there for them if they need and want help staying or getting back on track. Our team constantly nurtures and checks a work and organizational culture that's fair, cooperative, respectful, transparent, mutually supportive, and beneficial. As an organization, checking in with who we serve daily to see if what we're doing works for them is built in as a core part of our model; so is checking in with our made-mostly-of-younger-people team. We actively listen and are responsive to one another, representing diverse perspectives and needs amoung ourselves.

There is no way at least one of these people, and likely more, will not call me out as needed: they already do. We're a sounding board for each other when we do make mistakes, and a crew to give help fixing them. And there is really no way anyone here, myself included, is going to be without the support we all need to do this kind of job well, and so we can all be okay.

I'm getting old, but most of our staff and volunteers are in their twenties: either right at the same age as those we serve or with a still-fresh memory of being younger but with enough space past for some extra and useful perspective. Our team can represent the people we aim to and do serve well. Often people my age start to get a bit itchy and uncomfortable about the idea of passing torches. I have no such worries. I'm earnestly so excited to do it every time I can here — I can sometimes become the annoying "look at all these pictures of my grandkids" person about it with friends when it happens and cool things get created.

If and when the time comes to pass the torch here, full stop, I can guarantee you I'm going to be the person most excited of all to see what this team does with it. I know because of the steam of this team, and my not going it alone, millions of young people will continue to have access to reliably accurate, inclusive, candid, and compassionate sex and relationships education through or branching off from Scarleteen for decades to come.

Like the Boston Women's Health Collective, The Jane Collective and (freaking finally!) the Cubs, we aspire to be and stay one of the great teams.

I'm not even a little bit surprised that I, somewhat unintentionally, have landed here, and Scarleteen with me. After all, "Who are those cool ladies?" is a direct quote from me in the fourth or fifth grade as I lovingly traced my fingertips over the photographs of the bell-bottomed, big-glasses-ed women of the Boston Women's Health Collective in the pages of Our Bodies, Ourselves. I'm unsurprised because I've so long idolized those amazing women (still do!) and other feminist collectives, and so was no doubt influenced and inspired by them. I think real, and strong, teamwork with this kind of work is ideally where you're going to land no matter what if you do this work well, keep at it for a long time, and stay committed to it. 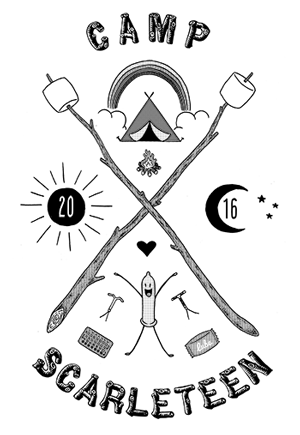 Having the team we do isn't just about preventing the bad stuff, it's about constantly creating and sustaining the good stuff we do for millions of young people around the world every single year. How camp went last year — and how immediately everyone there announced this just had to be an every-year thing — both emphasized and further cemented how great a team we are and how dedicated we all are to making that benefit as many people, and their sexual lives and selves, as we can. To find out more about camp on the whole and what we have planned for this year, take a gander over here.

This team is the team any of our users can have access to just by asking; get the benefit of whether that need is immediate and brief, or whether they want this team for days, weeks, months or even years (we even have users still around engaging with us who have used our services for a decade). This is the cohesive, highly communicative and we-got-this squad that co-creates content and works together, including supporting one another, in the direct services we provide, often used most by our most distressed or vulnerable users. This team being a great team, and doing things to stay a great team, means our readers, users, allies and partners get not just the good stuff, but the great stuff.

You perhaps now have a better idea of why doing this thing once a year to grow, connect, spark, nurture, recognize, and thank our team is so important to us, and why it's also important for our larger community: our readers and site users, their families, our colleagues, our allies, our field. We do amazing, unique, and sometimes even revolutionary, things together that expressly serve underserved people with much-needed, big things.

Supporting camp is one way you can help cheer our team, and all that it does, on.

To make a (tax-deductible) donation to Scarleteen for camp — or just because — click here.

We raise our kayak oars -- and weepy directorial fumbled speeches -- of the future in your general direction. Thanks so much!