In the early 1970s, A. Albert Yuzpe developed what was called "the Yupze regimen," a progestin-only after-sex contraceptive formulation.  However, it had some gnarly side effects, so didn't stick around. The first medication developed and sold expressly as emergency contraception, Schering PC4, sans the aforementioned gnarly side effects, was approved in the United Kingdom in January 1984. But only in the late 1990s was any form of emergency contraception designed and sold as such approved and made available widely. 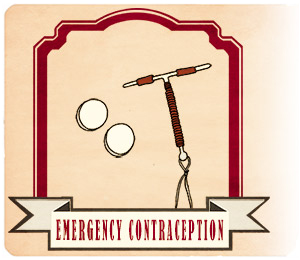 EC pills can prevent pregnancy primarily by delaying or inhibiting ovulation and inhibiting fertilization, and that may be the only way it works, as it is the way it has been proven to work in clinical studies. As explained by the ARHP, "although early studies indicated that alterations in the endometrium after treatment with the regimen might impair receptivity to implantation of a fertilized egg, more recent studies have found no such effects on the endometrium. Additional possible mechanisms include interference with corpus luteum function; thickening of the cervical mucus resulting in trapping of sperm; alterations in the tubal transport of sperm, egg, or embryo; and direct inhibition of fertilization. No clinical data exist regarding the last three possibilities."

Some people -- no thanks to a lot of purposefully misleading propaganda -- confuse emergency contraception with medical abortion (sometimes called RU486 or M&M, an abbreviation for mifepristone and misoprostol, two medications used for medical abortion/ the abortion pill), but emergency contraception cannot be used to terminate an existing pregnancy: it can only help prevent one.

If a pregnancy has already occurred, EC will not be effective: only a method of abortion can be used to intentionally terminate a pregnancy.

Where some of the confusion comes in about that is that unlike other methods of contraception, EC is used after intercourse rather than before., but befor a person actually becomes pregnant. Many people don't know or understand that conception is a process that takes around 5-7 days to occur, instead of happening instantly when, or right after, people have sex.  Emergency contraception can prevent pregnancy because it works before pregnancy happens.

If you've heard about people refusing to fill EC prescriptions or objecting to EC but NOT objecting to other methods of hormonal birth control, you can perhaps now see the giant flaw in that idea. The only thing that makes EC different from other combination hormonal contraceptives is that it is taken after a risk, rather than before, though even that is only partially true, since ongoing hormonal birth control is taken both before AND after, as those methods administer hormones to the body daily.

One critical difference between EC and other contraceptives is that it is NOT meant to be used as an ongoing or sole contraceptive. It is, instead, intended to be used only for emergencies, and used infrequently. Not only would frequent or ongoing use that get mighty expensive -- EC pills can cost as much as $60 and an IUD inserted as EC can cost as much as $900 -- it's also not as effective as other methods of contraception. It contains a higher dose of hormones than other hormonal methods, and is not designed for, nor has been studied for, regular use. Too, because it is more progestin -- the hormone used for it -- all at once than with contraceptives like the pill or implant, ongoing side effects for many people would be unmanageable.

In many countries, emergency contraception pills can be obtained over-the-counter at pharmacies, or through sexual healthcare providers or general health clinics, without an exam. In the United States, people of any age can purchase EC pills over-the-counter at any pharmacy. Other emergency contraception pills are currently only available to people seventeen or over, unless they are obtained through a doctor's office, sexual health clinic, or hospital emergency room.

Legal policy about refusals -- based on sexual discrimination, rules of professional conduct and medical ethics, but also rights of personal belief on the part of pharmacists -- has been established in some states, and is still in the process of being established in others. If you or a friend are refused any form of contraception, including emergency contraception, and you want to take action about a refusal in the United States, you can contact the Reproductive Rights wing of the ACLU or the National Women's Law Center.

If you have just had sex that may have resulted in a high pregnancy risk (if you're not sure what sort of sexual activity involves a pregnancy risk, check out this pregnancy risk assessment page) and you do not wish to become pregnant, you should obtain EC as soon as possible: the sooner they are used, the more likely they are to be effective. Ella is just as effective later in the time window (5 days) as compared to Plan B or other levonorgestrel-based EC pills, whose effectiveness rate can drop by up to 15% after the first 24 hours after the pregnancy risk.

Once you've found a healthcare provider or pharmacy who can prescribe/dispense ECP, you'll need to call their office or visit in person.

Ella (or EllaOne in the UK) is a package with one single pill that contains the hormone ulipristal acetate. It is slightly more effective than Plan B or other levonogestrel-based ECs Unlike Plan B or others that are widely available, Ella is only available via prescription. There are some websites where you can get an online prescription and get it delivered (more about this here). If you throw up within 3 hours of taking the medication, the manufacturers suggest contacting the prescribing provider to see if you need to take another dose.

Similarly, Plan B is a package of either one or two pills. With packages of two, you take both together or, if you're prone to stomach upset from the pills, take one, then 12 hours later, take the other. If you throw up inside an hour of taking your pills, you may need to get a new pack and start over. It's always smart to take a pregnancy test two weeks or so after using EC, especially if you have not yet had your period at that time.

As well, the Copper-T IUD can also be inserted by a doctor for emergency contraception, as well as for continued use afterwards. Insertion of a Copper-T is more effective as EC than Plan B or using birth control pills -- only 1 in 1,000 peoplenwill become pregnant if an IUD is used as an emergency contraceptive -- and it may also be inserted as many as eight days after a risk, three days longer than Plan B may be effective. To use an IUD as EC, you'll need to schedule a visit with a sexual healthcare provider.

Check out the following links for more information about emergency contraception and for some questions and answers about EC:

When Good Birth Control Does Bad Things: EC is less likely to work the longer someone waits before taking it: it is MOST effective used within the first 24 hours. If a person takes it from 72-120 hours, it may still work, but is substantially less likely to. If taken after 120 hours -- while pregnancy may not occur just because it wasn't going to anyway -- it doesn't have a shot at working at all. It's a great idea if you're sexually active to have a pack or a prescription for Plan B on hand in advance: that way, if you ever need it, you can be able to take it immediately.

With oral ECs, a person's body size may impact the medication's effectiveness. Studies have demonstrated that people with a Body Mass Index (BMI) of 30 or higher may not have Plan B work as well for them. Ella gives a wider margin for this - their studies showed a decreased rate of effectiveness at a BMI of 35 or higher (more on this here). If you're concerned about the effectiveness of these medications in respect to your body size, check in with your pharmacist or medical provider to see what options are best for you.

If a person throws up the pills (which is more likely to happen with Plan B if you take both pills at once) they aren't going to work.

Plan B, Ella, and other EC pills are widely considered to be very safe for occasional use - the health risks are similar to those of other oral contraceptives. While -- because they are not being used daily, but very rarely -- many people who can't use other hormonal contraceptives can usually use EC, do be sure to inform your pharmacist or healthcare provider about your medical history so they can be sure EC is the right choice for you. Some common side effects with EC include: nausea, headaches, dizziness, breast tenderness and irregular or unexplained vaginal bleeding or spotting.

If you are going to use EC or have used EC, we suggest you do yourself -- and your sanity -- a favor and abstain from sexual intercourse for at least a few days. EC should not be considered to offer pregnancy prevention for sex which occurs while taking it or shortly thereafter taking it. Taking EC right after taking it again is likely to leave you feeling pretty cruddy and also pretty broke, so it's wise to put sex on the shelf while you deal with the current risk and come back to it after you have a little time to work through this. Obviously, if you are using EC because another method was not used, before coming to sex again which presents pregnancy risks, you'll want to assure that, for the next time, you do have a reliable method of birth control which will be used and which you have used long enough to be effective when we're talking about hormonal methods, or have had some practice with, such as barrier methods. If you intend to use condoms alone, you want to assure you know how to use them properly and that your partner intends to cooperate.

Plan B or Ella can be used as a backup method with ANY other form of contraception, but with some hormonal methods -- especially when a user is just starting them -- may pose or create extra side effects.

Why would emergency contraception be a good option for me? If any of the following are true: