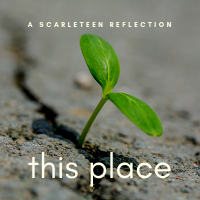 Messages like these haunted my head. They lived in my body. I’d known them my whole life, but put into language, they sound strange. I did not hear these words; I felt them, clearly stated in a language of looks. The look when my shirt fell low or my jeans fit tight, when I sang along with a song that talked cherries or fucks. The burning focus, the raised eyebrows, the unstated question: are you asking for it? Are you that girl? I changed the radio station, I pressed my arms over my chest. No, of course not. I only wore this because it’s hot outside. I didn’t realize.

Eyes on me, after, even as they wandered. Dissonance. My dad turning to my brother to talk about the waitress’ legs. The waitress my age. My mom painting larger-than-life canvases of women’s naked bodies, insisting my Tootsie Pop tee (“How many licks does it take?”) was too risqué. Make sense of this. My mind could not. My body found a different language: tensed muscles, desires not just unnamed but unknown.

When I found Scarleteen, I had found my way through if I want girls, does that make me a boy and if I want girls like a boy, does that make me a rapist? – a journey every bit as tortured as it sounds. I had come out as gay, dyed my hair blue, and bought a silver double-woman pendant. Out, I felt lucky. My parents were supportive, mostly. More than many. My dad: relieved he’d never have to meet a boy intent on fucking me. My mom: convinced women were the source of all things good. Me: gay and out and still somehow at a loss. Hair blue and cheeks plum-red.

At school, I was the face of the LGBTQ organization, advocating for our community on-campus. At meetings, my prudishness was a common joke. You just need to get laid. Sex was something that it seems would happen to me, even here.

My senior year, I got tendonitis in my hand. Two girls, a couple not yet out, approached me in the dining hall, smirking at the sight of my brace. Hurt your hand? they asked, eyebrows raised. Nothing serious, I said. Probably too much texting or something. Sure, they said. Texting. Sex was assumed, incorrectly. We were mismatched from our lives. They were gay and not out and making each other groan with pleasure in their dorm rooms. I was the poster-child of the queer student org, and I had tendonitis from texting. No euphemism needed.

We just need to get you laid.

I felt broken and weird, an oddity among the straights and queers alike. I didn’t know who I was or who to be. I didn’t have poor body image, per se. I had a sense of my body as not my own. It wasn’t better, but it was a different challenge.

There’s a version of this story where I end up being ace, and that’s that. Sexuality is fluid, but it doesn’t have to be. Asexuality is valid. The version of this story that I lived, the one that’s mine, is difficult to tell when it seems like it might undermine that fact. I thought I might be asexual; I’m not. Other people think they might be asexual; they are. If this were a choose your own adventure, asexuality would be a valid ending. My story just took a different turn.

I spend a summer in San Francisco. An ace friend invites me to an event at the Center for Sex and Culture, a celebration of Scarleteen’s ten-year anniversary. I’m a queer activist and gender studies minor, standing in front of a display of vibrators across time. I am equal parts fascinated and overwhelmed. But I attend.

We lounge in overstuffed chairs. People chat; I eavesdrop. Carol Queen is sitting across from me wearing a bondage.com t-shirt. This is an actual thing that happens. My friend introduces himself. People talk about asexuality, and people talk about sex. I watch. I listen.

Carol introduces Heather (the founder of Scarleteen), and says a little about Scarleteen. We all applaud. Heather gives a Q&A about the site, and the difficulties of providing comprehensive, compassionate sex ed to a population people prefer stay uninformed. They joke that sex ed is the only profession where field experience works against you. I could help with that, offers my ace friend, who has no field experience. We all laugh, but Heather’s game. You’d be great at this, they tell him.

Afterward, we stand around chatting. My friend and Heather brainstorm possibilities for ace outreach at Scarleteen. I’m assumed ace by association. I don’t mind. It’s less wrong than the usual assumptions, and better: there’s no edge to it. I’m assumed ace in a sex-positive space where being ace is fine.

I’m assumed fine, unconditionally, for maybe the first time in my life.

I start to write about sexuality, asexuality, and all the surrounding terrain.

I write a blog.

I write for Scarleteen.

Ten years have passed since I found this site. I’ve changed dramatically and not at all. I’m still equally capable of making a double entendre and blushing plum at one.

I’ve changed dramatically because of this place that never insisted I change. This place where it didn’t matter how—or even if—I was sexual gave me sexuality as something I could live. Sex became something I could know about, talk about, do, enjoy and choose. My body became livable. Imagine that.

Imagine the distance from no sex education to this wealth of it. Imagine sex is something done to you becoming you’re in charge of your choices. Becoming good sex feels good before, during, and after. Becoming nothing about you is wrong.

Nothing is, you know. And what a relief, to have a space that insists on that. To have this haven to inhabit until we can be, ourselves, at home.