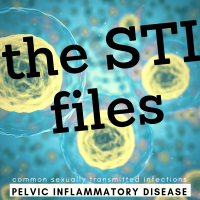 Stat: Of all infertile people with uteruses, an estimated 15 percent are infertile because of PID.

What is it exactly? "Pelvic inflammatory disease" is shorthand for any serious, non-specific bacterial infection of the reproductive organs that are housed in the pelvis: the uterus, uterine lining, fallopian tubes, and/or ovaries. These infections usually start in the vagina and, when left untreated, can progressively infect other reproductive organs. 20% of PID cases are found in teens, who often are afraid or unable to get reproductive health care. PID can result in permanent infertility and chronic pain.

About how many people have it? About one million cases of PID are reported in the United States annually.

How is it spread? In most cases, other sexually transmitted diseases and infections such as gonorrhea and chlamydia are at the root of PID, especially when they are left untreated. Some cases of PID are due to infections with more than one type of bacteria.

What are its symptoms?
• painful periods that may last longer than previous cycles
• unusual vaginal discharge
• spotting or cramping between periods
• pain or cramping during urination, or blood in the urine
• lower back or abdominal pain
• fever
• nausea or vomiting
• pain during vaginal intercourse

How is it diagnosed? PID is often difficult to diagnose, and it is widely thought that millions of cases each year go undiagnosed. To diagnose PID, you will need a pelvic exam which includes a Pap smear. Other tests for PID can include: microscopic examination and/or culture of vaginal and cervical secretions, a blood test, or an ultrasound. Your healthcare provider may also decide to perform an endometrial biopsy, where a small amount of the tissue lining the uterus is removed and examined under a microscope. For further diagnosis and assessment of damage a laparoscopy — a surgical procedure where an optical instrument is inserted through a small cut in the navel to look at the reproductive organs — may be required. It is also imperative that you tell your doctor or clinician if you have been sexually active with a partner and what your sexual history has been.

Is it treatable? In some cases, antibiotics, bed rest, and sexual celibacy are prescribed. In other cases, surgery may be required, including the possible removal of some reproductive organs.

Is it curable? In some cases, but it can recur even once treated if the person becomes reinfected.

Can it effect fertility? PID can lead to permanent sterility or ectopic pregnancy.

Can it cause death? Almost any bacterial infection, if it becomes serious enough or affects enough of the body's systems, can potentially cause severe injury or death.

How can we protect against it? Using condoms during vaginal intercourse offers a very high level of protection from PID.

Annual STD screenings also reduce the risk by finding other STDs or STIs and treating them before they can progress to cause PID. Because PID is caused by other untreated infection, it is one of many reasons why it is so important for people to get gynecological exams and full STI screenings at least once every year, without fail.