Hot Girl Hangups: Talking Through the Tension Between Bimbos and Feminism 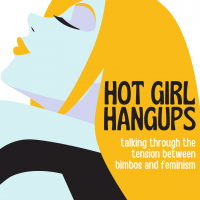 The idea that feminism and femininity are at odds is a common one, but to me, this apparent conflict seems unnecessary. For one thing, the idea that ‘a woman should be able to wear whatever she wants and still be taken seriously’ can and ought to apply to wearing ‘girly’ clothes. But also, as a short-haired feminist who rejects certain gender expectations in the way I dress, I find it so funny that a person who identifies as a woman and presents femininely would struggle with questions of whether her presentation is valid. In my mind, the comfort that being gender-typical affords you should allow you to move through any space you want, doing whatever you want. But I recognize this feeling in me is based on a stubborn assumption - I think the experiences of someone like this should be simple, but they aren’t.

A part of this I find even more interesting, as may also be the case for all you other gender studies nerds, is the idea that the “girly girl,” the high femme, and maybe even the feminine wholesale, is a stereotype. A woman who has long hair, wears dresses and skirts occasionally, and loves makeup is embodying an oversimplified and potentially insulting idea of what it means to be a woman. I’m going to show my hand early here and say that I think people present themselves based on the examples that are available to them, and that while ideas about gender can be harmful (like when we say the “girly girl” is the only way for women to be and that people who are not women can not be “girly”), it takes more than just having a certain presentation to do harm. These kinds of ideas about femininity are really interesting, and they lead into what I want to talk about.

exploited by a vicious tabloid culture. As time and a growing awareness of feminist ideas lend kindness to the these women, so too has the concept of the bimbo evolved into something new.

The media and general populace gave these celebrities the title of “bimbo”, and in doing so, insisted that being a bimbo was a bad thing, meant to label feminine-presenting people as less intelligent.

The bimbo is a product of a misogynistic imagination, a sex object and an ableist stereotype. Her image is tied up in ageism as well, being forever young and childlike. Because the outlines of the bimbo stereotype are so bold, and her character so outrageous, she makes perfect material for drag and other kinds of gender play and parody. Users on social media enjoy poking fun at the stereotype and use it to play with their own gender and sexuality. And, because gender is weird, people have begun to mess with language so that people of all genders can play with it as well, leading to the rise of the himbo and the thembo (the he/him and they/them versions of the bimbo).

But is all of this, like, okay? Is it useful or even good to use a problematic term as a way of addressing its history, with the harm it’s done? Spoiler alert: I think it is, but even if playing with gender stereotypes doesn’t provide solid enough ground for effective feminist action, I still think it’s a worthwhile and inevitable piece in gender exploration. Let’s talk about it.

What is a bimbo?

Here lies the outline of the bimbo, refused to be filled in by eyes that see her as less-than. Instead, she is a caricature, assigned the role of sex object. This is how bigotry operates - it tells you who you are based on its assumptions about you, and then decides what it assumes is immoral.

The bimbo carries with it some of the most hyper-realized forms of bigotry against women, of the double standards we face. We are expected to be subservient to men, and are judged if we depend on them too much. We are supposed to take care of ourselves, but are judged if we care about our appearance too much. We are supposed to be available for sex and fulfill the desires of our partner, presumably a man, but we can’t enjoy sex too much. And the woman who upsets those expectations is cursed with a bad name: bimbo.

It’s no surprise, then, that because these expectations align with common feminist stances on pleasure, autonomy, and freedom of presentation (ie, that we have a right to them), people have begun to reclaim the bimbo in an act of righteous defiance. You think I’m a bad person for doing what I want and dressing how I want? Fine. Then I’ll be a bimbo!

a TikTok by joking about struggling with math and ends with a message on dismantling the patriarchy, tagging it #ihatecapitalism. These things paired with the whiplash speed of the video may tickle the viewer or completely confuse them, but the directness of the political messaging leaves a strong impression.

That’s the thing with people who are typecast into these roles, stuck with the label based on unkind assumptions - “bimbos” are indeed real people who understand themselves in relation to the world around them and can knowingly perform their role. Sometimes out of necessity or because of typecasting - Marilyn Monroe, for example, was an actress who fought against the way society and the industry painted her as an object, but had to perform the Marilyn-bimbo character because those were the roles given to her - and she took those roles because she had bills to pay and studio contracts to fulfill. There is an important difference between purposeful performance and mandatory performance that we should remember when dealing with certain ideas of gender. Gender performance can be fun and playful or a purposeful act of defiance, and we often defy expectations to avoid being trapped by them.

Up to this point I’ve talked about the bimbo stereotype in relation to women, focusing on its function as a tool of the patriarchy. But make no mistake - women aren’t the only ones playing with these ideas. In my experience, you can’t talk this much about gender without eventually bringing in sexuality and queerness. The combination of using the stereotype to combat bigotry combined with the outrageousness of gender expectations (and, let’s not forget, the cute costume) makes the bimbo prime material for gender play and drag. Readers may recognize names like Trixie Mattel and Jaymes Mansfield, two former contestants on Ru Paul’s Drag Race who strongly embody the bimbo character in their drag and who cite celebrity “bimbos” like Amanda Lepore and Dolly Parton as their style inspiration.

Dolly Parton, Gender, and Country Music,” talks about her public persona as a kind of performance art in which she “position[s] herself as a sexualized object in a knowing way, so she’s making fun of it and she’s in control of it. That’s how she’s using a version of theatrical burlesque. She’s sort of a female-female impersonator. It’s a critical parody.”

Griffin Maxwell Brooks, another #BimboTok poster, is not afraid to use their platform to post thirst traps alongside the discourse (and they are NOT alone in this).

The tension between feminism and femininity is heavily present in bimbo discourse. I think it's important to see how the word “bimbo” has lost some of its bite, because it shows how our attitudes towards women, gender, and sexuality have changed over time. I for one have had fun in my own personal explorations of gender presentation through clothing - my lilac-colored platforms sit in my closet next to a pair of classic black combat boots - and I hope everyone else can, too.