Beezus Murphy's Mom Had an Abortion: An Interview 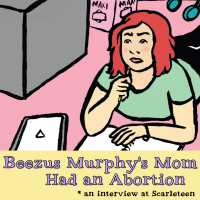 My Mom Had an Abortion is a comic written by Beezus B. Murphy, illustrated by Tatiana Gill, and produced by the Shout Your Abortion network. It tells a unique and personal coming of age story, while emphasizing the importance of choice.  In this interview between two high school students across the country from one another, interviewer Zosia Johnson and Beezus discuss this story, and why Beezus decided to share it.

Zosia: What inspired you to write this story, and what was your goal when deciding to publish it to an audience?

Beezus: I guess I just really wanted to share my story, which I believe everyone should do if they feel comfortable doing so. Everyone has a wealth of different experiences that others can learn from and everyone’s perspective on life is valid and important. People need people. We need each to learn and grow and become stronger as a community. I was able to become socially tolerant and literate over the years about a variety of issues by learning about other people’s experiences so I wanted to do the same. If my book has taught at least one person something and given them some piece of insight, it’ll all be worth it.

Some statements in this interview are no longer accurate following the 6/24/22 United States supreme court decision on Dobbs Vs. Jackson Women's Health Organization that dismantled Roe Vs. Wade, and with it, federal protections regarding abortion and other related healthcare services and human rights. For the most current information about abortion restrictions, be sure to look for pieces written or updated after that date, or to the resources listed within and at the bottom of this statement.

Zosia: What messages would you like to see television shows, movies, and other mass media convey about abortion? Similarly, what are some media examples you feel positively represents the choice of abortion?

Beezus: I want abortion to be portrayed as what it is; a completely normal medical procedure that many people have during the course of their lifetimes. It’s not a big deal. There are a few pieces of media I’ve enjoyed that I feel portrayed abortion in a positive and balanced way. In the Season Three episode “Brrap Brrap Pew Pew” of Netflix dramedy series BoJack Horseman, Diane Nguyen (played by Alison Brie) gets pregnant and has an abortion. It’s an easy decision for her as she and her husband don’t want children and quickly come to an agreement about it. In Season Two of CW series Crazy Ex-Girlfriend, series deuteragonist Paula Proctor (Donna Lynne Champlin) gets pregnant at the worst possible time; she’s just been accepted into law school and knows it isn’t feasible for her to back to school while preparing to have another child. When her husband brings up the fact that she could get an abortion, she initially dismisses it because she thinks it’s something only teenagers do. However, she ultimately decides that it’s the best thing to do in the situation and gets an abortion. What made it so meaningful for me is that it showed a different perspective on abortion than what’s usually seen in media; middle-aged women get pregnant without planning to as well and some of them don’t go through with those pregnancies, too.

Another good portrayal of abortion that I very much appreciated was during Season Two of Netflix’s Dear White People, when college junior Coco (Antoinette Robertson) gets pregnant and decides to get an abortion. Once she and her roomate gets to the clinic, Coco appears to be having one of those epiphanies that women are always getting at abortion clinics in media. She imagines the possible life she might have if she keeps it, but then ultimately decides that she’s going through with the procedure anyway. Another abortion story that I enjoyed occurred in Season Five Episode Five “The Long Road Home” of NBC dramedy This Is Us when we find about out tritagonist Kate Pearson (Chrissy Metz present, Hannah Zeile young) had an abortion when she was eighteen. The reflection on her past was brought on by an intense conversation with her daughter’s birth mother Ellie (Annie Funke). Through the show’s signature medium of flashback, we see the story of Kate’s relationship with her abusive ex boyfriend Marc (Austin Abrams past, Dusty Sorg present) and how she got an abortion following their breakup. While it’s clear Kate never regretted the decision, she had trouble opening up about it and her trauma regarding their relationship even over twenty years later.

"What do all these stories have in common? Next to nothing. That’s the point, they’re all different stories. No two abortion stories are the same and media should represent that."

The episode prior Ellie opened up about her own struggles with her unplanned pregnancy and how she planned on getting an abortion but ultimately couldn’t go through with it. Kate never shamed her or expressed any judgment regarding her choice, accepting that they both did what was right for them. What do all these stories have in common? Next to nothing. That’s the point, they’re all different stories. No two abortion stories are the same and media should represent that. I hope to see more good representations of abortion in the media I partake in going forward.

Zosia: If you could add another chapter to this story following the challenging of Roe V. Wade in recent months, what would it detail?

Beezus: Looking back, there are definitely some things I would've done differently regarding my book if I were writing it today. But at the same time, I’m not sure how I would write about what I’ve been feeling regarding all the abortion controversy lately. The whole thing is just pissing me off so much I’m not really sure where to begin, or how to articulate just how outraged I am. How could these people even do this? If abortions aren’t for you, then that’s fine, but you don’t have the right to tell other people how to live their lives. And no one should ever have the right to do something like overturning a law that is hurting no one. It’s despicable, truly despicable. The worst part is I’m so worried it might actually happen.

Zosia: How can we, as a collective society and as individuals, lessen the stigma around abortion? What conversations need to be had?

Beezus: I think we need to just talk to each other more. The world would be such a better and more understanding place if more people were able to articulate their feelings, experiences and traumas to others. Maybe then we wouldn’t all feel so alone sometimes and we’d realize that we don’t constantly need to be divided.

To always find the most current information on legality of abortion in the United States and its individual states, we suggest some of the sources we are looking to to stay current with this information:
• For information about where each state stands after the decision: this and other related pieces at the New York Times, this one from the19th*, and this one from the Center for Reproductive Rights.
• For help acessing abortion in the United States or finding out what your access options are, the National Abortion Federation's hotline: 1-800-772-9100
• For legal help with or information about self-managed abortion: If/When/How's helpline, and in the event you want or need a self-managed abortion, AidAccess.
• You can always come into our direct services (the message boards, text service or chat service) to ask us to help you find information about accessing abortion where you live, or for any other information about abortion.

Zosia: What are some accessible tools people can use to educate themselves on abortion and pro-choice viewpoints?

Beezus: I definitely say reaching out to others about their experiences is a great way to do it. Media is also a good learning tool. There are plenty of books and pieces of media that feature good and important portrayals of abortion.

Zosia: This story touches upon a few intersectional identities from sexuality, to the experience of growing up assigned female at birth, to race, through the Black Lives Matter movement. How do these identities intersect with each other within your story through the lens of abortion, and within the world as it functions?

Beezus: I would say that I didn’t so much see my story about being about abortion necessarily as it was about my personal journey as a developing human being and activist. I personally don’t believe that if you can’t stand for the rights of everyone, then you can’t really stand for the rights of anyone. If acceptance is your goal, then you yourself need to accept and respect the choices and identities of others.

Zosia: For people who are “plagued by intolerance” towards these identities, what would be your prescribed antidote to cure them of their -isms?

Beezus: I think what people need to do, and not just those ignorant about the plights of others, is educate themselves about other people’s experiences and try to see things from their perspectives. You can’t simply rely on your own experiences to inform your beliefs. Intolerance is a state of mind, but it’s by no means permanent. Nothing in life is permanent. All of this is why sometimes you need to rely on the wisdom of others. I know that I probably sound like a broken record with this, but that’s truly what I believe. People need others in order to grow as human beings.

Zosia: One of the themes throughout this comic is how the bodies of those assigned female at birth are treated as battlegrounds, from things like rape, legislation of abortion, and objectification, to the universals of puberty, and the uncomfortable experience of using tampons for the first time. If you could deliver a message to young people who are struggling to live this experience, what would you want to say?

Beezus: I would say that there is no right or wrong way for you to embrace yourself and your body. As long as you're happy and you accept yourself, then you’ll be alright. Everyone should do what’s right for them and not let other people’s arbitrary opinions affect how you see yourself and your body. No one, except in some cases your physician, should dictate what you do with your body. That’s the whole point of “my body, my choice.”

Zosia: This story ends with the encouragement to find your own path, where do you see your path leading you next?

Beezus: I want to continue writing and trying to change the world for the better with my art. One thing that I’ve been worrying about far too lately is whether or not I’ll ever be able to top this novel. But maybe it isn’t important whether or not I “top myself” per se, but that I’m able to keep sincerely expressing myself through my writing. And that’s really what being an artist is all about; using creative means in order to express how you feel and help create the world you enivision.

Illustration in graphic by Tatiana Gill from My Mom Had an Abortion.

I, Being Born Woman and Suppressed