The Simple and Underrated Art of Washing Your Hands 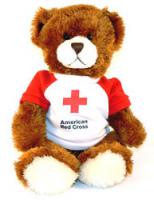 My mother worked in public health nursing and hospital administration all my life, specifically in the area of infectious disease control, so she's a dame that takes her handwashing Very, Very Seriously. It's a wonder me and my sister's hands didn't fall off as often as we washed them growing up.  The rest of our bodies may have been covered in mud, but our hands were always sparkling. Plus, I often hung out at the hospital with my mother, which, as a very curious kid, meant getting into things I shouldn't have been anywhere near almost constantly, adventures that often ended with a super-panicky scrubdown.

One time in my teens, at the children's hospital my mother works for, whatever dude was supposed to wear the Scrubby the Handwashing Bear suit didn't show up. So, I wound up being Scrubby for a day, walking around telling people to wash their hands while trying not to fall over from the alarming weight of its giant fuzzy head.

I'm delighted to report that when I looked for images of Scrubby I found plenty. Unbeknownst to me until today (blessedly, unbeknownst to my mother, too), there's even a Scrubby Bear handwashing song. I confess, I have always had a small, sinking suspicion she might have made it all up and found a bear suit just to torment me. That's a relief. Of course, my mother is going to wind up reading this, and is she's going to be all, "Oh, Heather! I would never---"

I'm writing about handwashing because lately we've had some users here who either don't know how to do it right, didn't know when to do it, or didn't know why to do it. We've also had readers freaking out about pregnancy risks around hands and fingers. If you're reading this and are in any of those spots, you might feel embarrassed, because something like this is so simple, right? Don't, if you do. Not everyone grows up with a germophobe-gone-pro, after all, and if your parents or guardians didn't teach you handwashing growing up, that's their fail, not yours. Plus, my Mom reviews this stuff with doctors every year, so even people we all probably figure know how by now still get this kind of review and reminder.

Why wash your hands?

"EEEeeeewohmig-d!" is not the right answer. So you can get crud off of them is, though. More to the point, so you can get crud off your hands which can, and often does, include bacteria and other pathogens that can, and often do, make you or others sick. Sometimes just a little sick, like being a pretty healthy person who just picks up a common cold. Sometimes really, really sick, like being a person with a suppressed immune system who then picks up typhoid.

In the smaller picture, washing your hands helps an awful lot to help keep you and others from getting sick. In the big picture, it supports the public health worldwide in a really major way. As any public health expert will tell you, handwashing is the single most effective way to prevent the spread of communicable diseases. That's quite the achievement for just a little soap and water.

How do you wash your hands?

Maybe "Duh!" is your answer to this one, but maybe it's not. Or maybe your duh isn't completely right. Either way, here's how you do it, brought to you with some help from the fine folks at the Red Cross who gave the world Scrubby:

Use an alcohol-based hand sanitizer.

Which is better, soap and water or hand sanitizer?

If your hands are visibly dirty, you need soap and water. If you're going to be touching your own genitals or those of someone else, soap and water is a better choice to avoid genital irritation.

The CDC says soap and water is better. They say that, "if clean, running water is not accessible, as is common in many parts of the world, use soap and available water. If soap and water are unavailable, use an alcohol-based hand sanitizer that contains at least 60% alcohol to clean hands."

But the jury is fairly out on which is better in a broad way, especially when we're not talking about a specific pathogen, but about the whole range (and even when we are talking about a specific pathogen, there's usually a lot of disagreement). It also really depends on who you ask, including which public health expert or researcher. There are some environmental concerns about hand sanitizers, too.

When should you wash your hands?

Before cooking or eating (and while cooking if you're touching any uncooked meat or fish), after using the bathroom (before is a good idea, too, especially if you're prone to UTIs, yeast or bacterial infections), before shaking a bunch of hands, after playing with or holding pets, after touching anything you know or suspect to be germy or possibly toxic, before and after administering any kind of first aid, and certainly before and after you touch someone else's genitals, mouth or nose.

Handwashing around any kind of intimate physical contact is a big part of infection prevention and control, and also a part of safer sex, one that often goes unmentioned, probably because a lot of folks just take for granted that everyone already knows about washing their hands. But handwashing before and after sexual activity is a part of safer sex, and an important one. If you're in the middle of sexual activities, but any of them involve any kind of anal sex with hands or fingers,you're then going to put anywhere else, you or any partners need to take a quick break to wash your hands before continuing with other activities. Otherwise, bacterial infection is a big risk.

Extra bonus? Some people worry about pregnancy due to semen on hands or fingers. Handwashing can help anyone with those worries stop worrying so they can focus on enjoying themselves, which everyone tends to prefer.

But does it get rid of sperm?

Yes, handwashing gets rid of any sperm cells that might have been on the hands or fingers. Most spermicides are basically just soap, so you can probably understand how handwashing not only washes those cells away, it also renders them pretty useless. People can forget or not realize that sperm cells are not superheroes with superpowers. They're really quite delicate.

But you should also know that pregnancy from indirect contact, like penis-to-hand-to-vulva or penis-to-doorknob-to-your hand-to-your notebook-to toilet paper - to your vulva) is highly unlikely, and pretty much impossible if sperm or semen, the fluid it's contained in and which protects those cells, gets off the bus at even one stop before on the bus-to-vagina route. The way pregnancy almost always occurs, when it does, is through direct genital-to-genital contact (and only when one person has a penis and the other a vulva), and/or through ejaculation directly on or very, very nearby the vulva or vaginal opening.

To find out more about how pregnancy happens, check it. If that doesn't help because you're freaking out right at this very moment, try this link instead.

Nope. That's because HIV/AIDS isn't transmitted by hands. HIV is transmitted by intimate contact -- direct contact with the vagina, vulva, penis, rectum, or mouth, open sores, breastfeeding, IV drug use or other needle sharing, or occupational exposure -- with blood, semen, vaginal fluids or breast milk. It's a fragile virus that doesn't fare well once outside the body.

But handwashing can go a long way when it comes to preventing transmission of other STIs, like the herpes virus, molluscum contagiosum, cytomegalovirus and hepatitis. Like I mentioned earlier, it also helps to prevent genital bacterial infections.

What about this zit on my chin?

I bet you thought I was going to say no. But in some way, yes, washing your hands can help with that zit. It can help it from getting worse, because you can increase any skin infection if and when you mess with it with hands that aren't clean, and handwashing after you touch a zit (yes, you're not supposed to, but I think we all know how often that's not what happens) helps keep you from spreading those germs around to other sites on your face.

Okay, then how about world hunger, can it get rid of that? How about road rage? Can it wash away the Tea Party?

Alas, it can't do any of those things. If only.

If you're coming away from this with the strong feeling that I'm telling you I think it's a good idea to wash your hands because I think you're dirty....well, you're right. I think I'm dirty, too.

People are dirty, but I don't mean that in a judgy way. I'm a big hippie: I think dirt is awesome. The thing is that we all walk around being the unwitting hitched-ride for a host of microorganisms all the time, every day. Every last one of us. Bacteria and other pathogens also have been around since way before people even existed. (They even have their own museum!) They figured out a very long time ago how easily they can hitch a ride on people and plants to get around, and they're awfully good at it.

Washing your hands isn't about you or other people or their fluids being gross (or someone else being gross, and you being somehow not-gross-like-them), but about all of those things being ways stuff that makes us sick often gets passed around because bacteria are clearly pretty hardcore efficiency experts. It's just about you getting rid of the kind of bacteria and other pathogens that can make you or others sick so you can enjoy your body, someone else's if you want, they can enjoy theirs, and we can all better enjoy our health and our lives.

An Infection Getting Worse and Worse: Can I Just Wait it Out?